According to the report, RLX has further enhanced on its investment in product quality and vaping science. Since its inception, RLX has invested RMB 800 million in R&D. RLX has established its laboratory matrix consists of eight labs for different purposes, and developed a “1+4” science research chain covering product quality, physiochemical research, toxicology research, long-term impact assessment and clinical research.

In March 2021, RLX launched the first e-cigarette clinical research project in China. In February 2022, RLX started the first clinical study on the safety of e-cigarettes in China. Both of the two projects were successfully registered on Chinese Clinical Trial Registry. Various researches led by RLX and renowned research institutions were published in prominent academic journals such as Ecotoxicology and Environmental Safety and Chinese Journal of Drug Abuse Prevention and Treatment.

Environment protection is another highlight in RLX’s CSR report. In September 2021, RLX started the Pods Reborn recycling program with China Siyuan Foundation for Poverty Alleviation. By June 2022, the program had been carried out in 188 cities in China and over 16,000 stores were equipped with a used pods recycling bin.

As part of endeavor of the Amur Tiger and Leopard Conservation Project RLX started with China Green Foundation in 2020, RLX has planted a total of 20 ha of eco-fields in Zhen’anling Village, Hunchun city, Jilin Province to ensure the amur tiger and leopard have sufficient food supply. RLX has also organized a patrol team to regular remove animal clips and traps in the woods, while tracking data of the wild animals. By the end of 2021, the total patrol distance of the RLX Tech Patrol Team had reached 12,600 kilometers.

In April 2022, RLX has also launched its net-zero carbon emission plan Aim for Zero to achieve carbon neutrality in its direct operations by 2033 and along the value chain by 2050.

Regarding to RLX’s market responsibility, the report said that by the end of 2021, RLX had opened more than 24,000 stores in more than 300 cities, creating about 370,000 jobs across the industry chain.

“In more than 4 years of entrepreneurship, one of the things we are particularly proud of, and we have no regrets about, is our dedication to fulfilling our social responsibility. RLX Tech sees social responsibility as one of its core competitive advantages. It is also our duty as corporate citizens.” said Kate Wang, founder and CEO of RLX Tech. 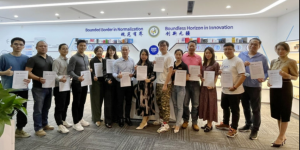